What managers are looking for in your performance data

With so much data available, what are the key metrics that Coaches and Managers are looking for in the modern footballer?

In the last decade, technology has changed the way Coaches and Managers evaluate and select players. It’s no surprise that players at all levels of the game are tracking and analysing their performance. We spoke to one of the professional coaches behind Catapult One, Tony Strudwick, to find out what metrics his former bosses, including the likes of Sir Alex Ferguson, Louis Van Gaal and Jose Mourinho often paid attention to.

“I think that’s dependant on the club’s philosophy and playing philosophy,” says Strudwick. “If you work for a coach that’s about high-intensity pressure, then you will be looking at certain metrics in a game such as how quickly you can win the ball back and the intensity you train and play at – that becomes important. If you’ve got a coach who has a different philosophy, it might just be about efficiency and circling the ball.”

With Catapult One you can look into these metrics Tony mentions, including high-intensity sprints, also known as ‘Power’. 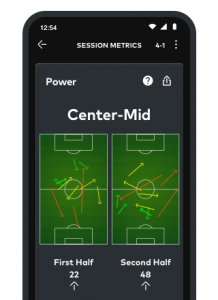 One of the biggest differentiators between the amateur and the elite game is the ability to sustain the number of Power throughout a game. Players can use this information to work on aerobic capacity, sprint distance and number of power plays, all information provided by the Catapult One app.

“It depends on the club, but invariably the four or five key things people will look at is the distance covered, the speed, the maximum velocity you’ve reached, acceleration and declaration and power – all the parameters that are really embedded into Catapult One. I always like to look at the intensity over time, whether or not it’s in five-minute blocks, but looking at these really intense bursts and how you can sustain that. 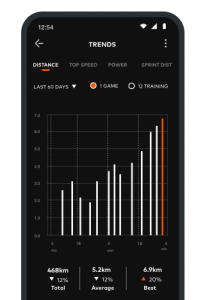 Players can analyse their performance and look for ways of improvement. The fitter you are, the more you can maximise these moments of intensity.

The Catapult One app gives tailored recovery advice for each performance including; nutrition and strength & conditioning exercises. 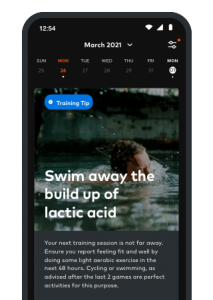 “We had to have a culture of acceptance, we had to sell it to the players and we had to demonstrate the benefits of this sports science approach,” Strudwick says. “Sir Alex Ferguson obviously went, David Moyes came in, and although it was a small tenure, he maintained that. When Louis Van Gaal came in, he maximised the benefits of that and particularly the wellness factor. It was something that was created and sustained over a 10-year period – we’re really proud of that.”